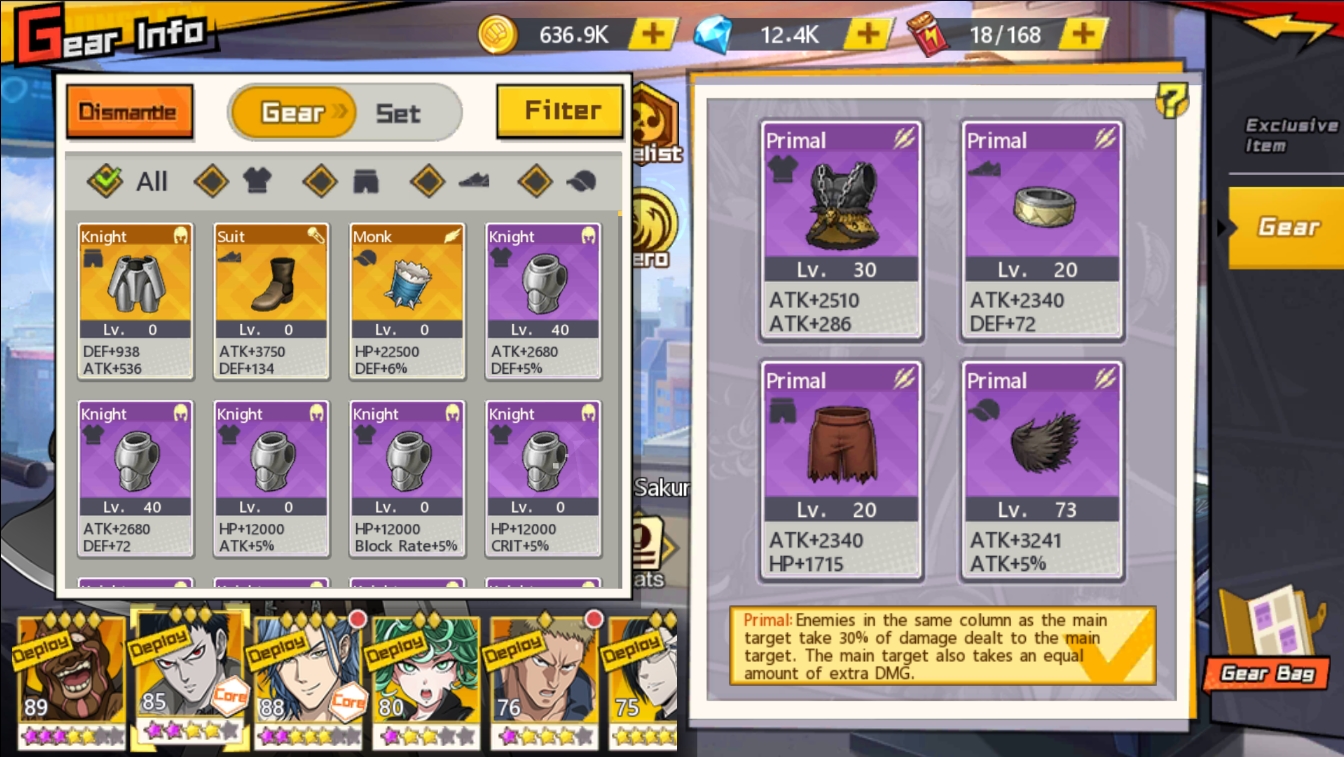 Formal: Takes whatever debuffs on the target AFTER the turn ends, and “transfers” it to the enemy in the same column.

Swordsman: Same as knight set, but without the bonus double damage to the main target you click on.

Lightning: Shitty version of primal without the bonus 30% to the main target.

Suit: GRANTS 20% damage reflect (not increases!) to the wearer, meaning that 20% of any damage dealt to the suit wearer will be reflected back. This is completely different from Carnage Passive (unrelated!), and also DOES NOT STACK WITH DEEP SEA KING CORE REFLECT! Also grants 10% healing after action taken that counts towards Dr Genus passive and Dr Genus core +2 energy. Don’t dismantle your suits, throw them on all your low lvls for Institute.

Casual: 10% healing after action. Used to be a good set, now mostly obselete thanks to Suit.

Gangster: 35% bonus damage on basic attacks (NOT ultimates!) but also affects follow-up attacks, making it good on Beast King and some other potential niche builds in future (flashy flash, garou…)

Scholar: Blocks trigger a self heal that’s a percentage of the damage received. Not very useful in current meta except to trigger Dr Genus buff and also has a weird use case on smile man.

Prisoner: Prisoner gear multiplies all dmg done during the atk for injury, shatter, berserk and crit dmg by 1.15x. Prisoner is good for AOE units with 5 hits >100% atk such as AS and Tatsu along with sky king passive. The 1.15x dmg boost is triggered by crit (has to crit each target once for it to work). It is difficult to get a good prisoner set, so it is best to stick to knight set, pls use it on the recommended characters if you get it in live clash though.

Gunner (Upgraded Prisoner): Triggering a critical hit increases all types of damage by 15% and your ATK increases by 8%.

Magic (Upgraded Scholar): Triggering a block restores HP equal to 10% of damage taken and your HP increases by 8%.

Flash (Upgraded Monk): Increase Drain Rate (Lifesteal) by 10%, and increase the speed by 10%

Sets in order of priority, first one is the best.

Where do I find more gears?