THINGS YOU MUST DO DAILY 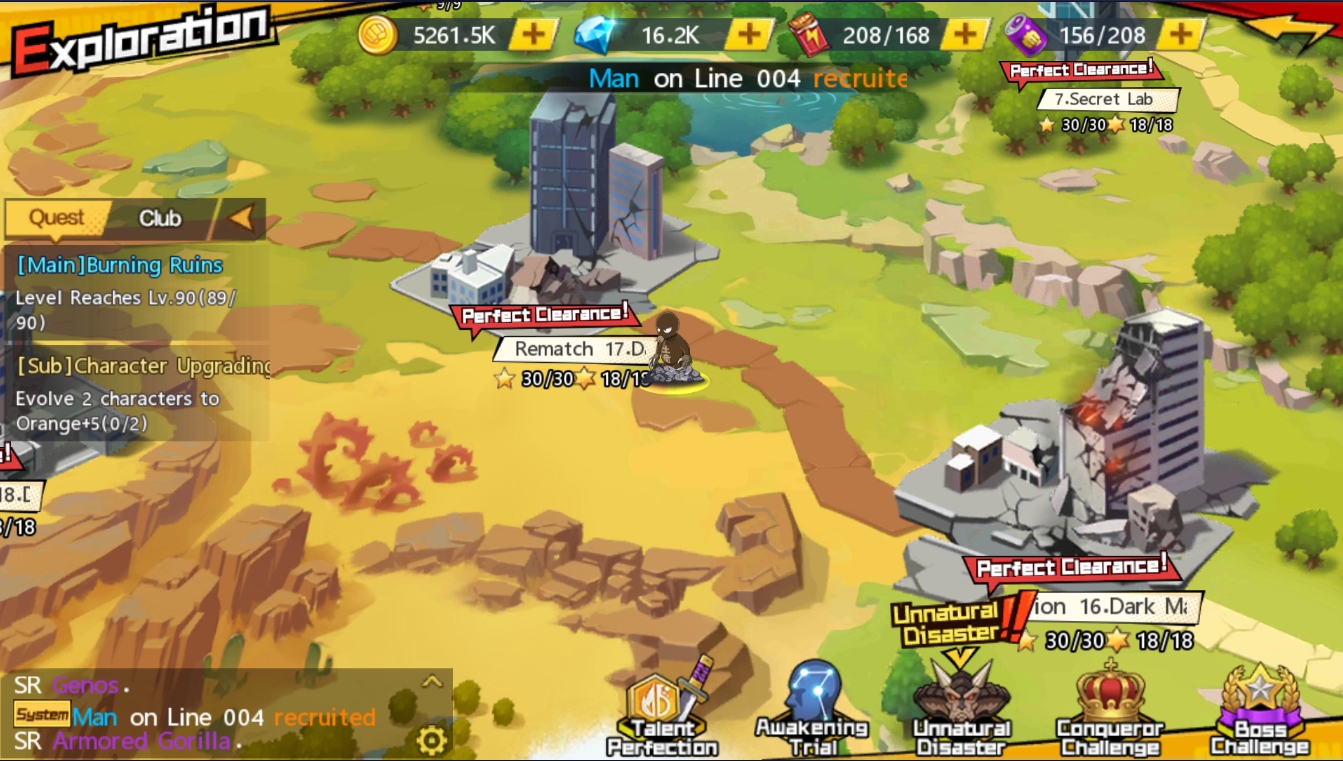 Just because you’re F2P doesn’t mean you can’t play competitively! As long as you do the following religiously, you can still be ahead of most players.

Before you start any of the below, it’s also worthwhile to always check your Sub Quest and try to complete it if you can, as you probably will complete multiple times more as you do other activities.

If you don’t see some of the content below, it means you server has not reached that stage yet (probably due to a later launch).

You need to complete ALL your daily quests, daily. There’s no excuses because it takes maybe about 30mins to an hour if you rush through everything. It is the single highest source of EXP in the game, and as you progress higher, you will find that levelling up is super important (like unlocking more core slots in lab, or reaching that awakening stage etc). Not only that, you also get free vit, 120 gems and an elite ticket. Just do it lah.

Sweep all your boss challenges daily. You can reset some of them if you have spare gems, I used to do so for Grapplers at one point because there are just too many Grapplers to level.

When you are mid/late game (eg Lv90+), you can stop sweeping duelists and hi-tech since you probably have too many. Sweep Grapplers and Espers only and use the stam for your evolution mats.

Again, just try your best to complete the highest stage once, and then sweep it after. Do note that the tokens won’t be used up if you fail so you can keep trying!

You want to constantly check your Parties throughout the day, and join only L parties for the best rewards. Keep a lookout for the chat, people will notify usually. Also look out for the unit ‘missions’ in both your house, as well as others.

Again, not a hard thing to do. Just spend 2 mins to send everyone off, and then another 2 mins when you come back after 4hours to collect your goodies. Don’t forget to collect the daily free rewards of 50 gems, 1 epic ticket and 60 stamina!

Many people tend to forget about this, or only do it once or twice due to timing. Your boss token refreshes every 6hours, if you do some simple math, you will realize that you cannot hit it more than 3 times, especially if you wake up late, or if you’re busy at work and forgot the 2nd fight.

I tend to do it at 9am (when I start work), 3pm, and 9pm. Set alarms if you have to, I have bot reminders set in my club discord.

The number of completed fights matter as they count towards the ‘Challenge Reward box’ that you see beside the rankings. At Geryu, you can get an orange box after 50 fights, which almost always has an orange.

As much as I hate to suggest it, it is one of your free and huge sources of gems. An extra 250 gems daily is nothing to scoff at. Keep switching till you get the gems (or whatever you want). They just added a 5mins cooldown timer which is retarded.

Make sure you complete your 4 main Saitama exercising quests (Push-Up, Sit-Up, Squat, Run) because you want to be strong like him right? The 5 Saitama talents are super important, and every single day counts towards your talent tree. DO IT.

Pro-tip: The ‘game day’ refreshes at 5am, so I usually set a long ass quest (6hrs) before I sleep at 12, so when it’s done at 6am, it counts towards the quests.

You’ll want to target one or two units to focus for the week, and check out which Qualifications they’re lacking, and sweep them. The reason is because these are time-gated (3x a day unless reset), whereas Normal stages are not. So you always want to sweep 3x at least daily for the units you require for evolution.

Update: With the new Training Center out, you’ll only want to focus on the top 8 units (2 of each class). Guide here.

This part is a little hidden and players may not know about it. If you go to Awaken and click preview (orange magnifying glass), you will see the Awaken Chips. Click instant clearance and sweep daily, as it is gated by behind 3x a day for each stage. You have to sweep separately for Hero and Monster chips.

Update: As time goes by, you’ll have more chips accumulated but being gated by core powers. When you have more than enough, you can just sweep maybe 1-2x per Faction to save Stamina for other uses.

Your best and only free way to get unit shards. Takes less than a minute. Just do it. Throw the character whose shards are hardest to obtain, usually an LSSR since you have a chance to draw dupes for SSRs/SRs on Elite/Epic tickets.

Tip: Some people like to spend gems to refresh 1x if you only get 1 shard in the 3 free tries. Totally optional.

I know I used to say don’t stockpile it, but as an F2P I believe stockpiling is a better option. Simply just buy vit twice a day, use it for the necessary stuff (like Epic CC), and then just stop. The reason being that the rewards you get from the monthly Events (which mainly require VIT) outweigh the cons in letting VIT cap and not letting it generate naturally. Overtime you should have a ton of VIT (I have like 7k now sitting), this means that you’ll have enough VIT to handle any Event that comes your way.

Everyday you get 1 free epic ticket draw, 1 free ascend supply token and 1 free parts supply token if you didn’t know. So make sure you draw them daily, those can’t be kept and ‘stacked’. You should still save your tokens for any upcoming rate ups.

DO ONE EXTRA ARENA (OPTIONAL)

You get 5 free arena chances daily, and most people stop at that. You’ll want to spend 20 gems to fight once more and get the 12-point arena reward which is a SR Omni Chest. 20 gems for a shard is a pretty good deal. This is OPTIONAL.

You can also do 10x Arena daily to get the omnishard, then you’ll have enough saved for the next LSSR you’re building.

While we’re on that topic, the same applies to peak arena, except that you need to spend 120gems for an extra 2 times (60 gems each for Hero and Monster), to get the Core Power H reward. This is quite pricey so this is optional. I stopped doing it after awhile. Feel free to do it if you’re missing a core power H to an upgrade, or if you have too many gems.

DO ONE EXTRA TOURNAMENT (MUST)

Ok one is subjective, it really depends if you have won all 8, cos you need 9 to get a nice juicy RND Omni Shard chest for only 50 gems. Technically it’s free because you get 50 gems from the tournament daily rewards. You might just get an SR chest sometimes, but it’s still worth the gamble for the SSR one for 50 gems. Just make sure you win all 8, and if you’re not confident just fight the bot. This one is NOT optional, a daily chance at SSR omnishard is too good to pass.

I hate live clash. But we don’t have a choice people. Complete your dailies to get free 6 battle supply tokens, 500 battle coins, and most importantly 100 gems. Don’t forget to claim your daily rune supply chest as well at the battle supplies!

After you have reached the highest level you can clear, always remember to collect the rewards. They get capped to the max every 8hrs, so you need to collect at least 3 times daily. Don’t let it cap out if you can!

After hitting 100 daily quest points, you get another ticket, so you can do 2x daily. Remember to always do the boss that you can hit the highest tier on so you can get guaranteed oranges from the counter box. And don’t forget to get free loots when the vault is open!

This one’s almost daily, it starts on Tues and ends on Sat. Do at least 10x on those days to get free 50gems! If you have time, quickly try to climb the ranks right when it opens on Tues 9AM. Aim to challenge all the Warzone Guards (bots), and if you can get to score 2000, that’s an easy 200 gems (which you will have a harder time obtaining later in the week as the bots will not be so frequent).

I guess this should be automated soon but at the moment you need to manually pull it. The first pull is free everyday. Remember to save up the tickets for potential future rate ups!

CORE TRIALS: Not a daily thing, but remember to complete it every time. It’s not that hard, and it’s core (pun intended) to upgrading your cores in laboratory. I’ll write up a core trial guide in a bit, so stay tuned!

CLUB CONTEST: For Club Contest, it’s Tues, Thurs and Sat. It can be daunting at first, and it does take some time to really go around the map and complete the tasks, but the rewards are worth it if you can spare the time. Even if you’re busy, making a quick run around, signing up a facility, and defeating most bosses will net you a huge amount of rewards for about 15-30mins work.

CLUB COMPETITION: War days are Mon, Wed and Fri, but runs for a month.

WORLD DISASTER: Mon, Wed and Fri; quick and fast to do.

APEX CLASH: The season lasts for 2 weeks but you can do it daily. Even if you don’t, the chances carry over to the next day for the duration of the season.

MIRAGE TRIALS: These are part of your emblem system content, and you get free 6 chances everyday, which caps at 50. You can do them anytime you want, just make sure you don’t let it stack past 50!

HONOR BATTLE: Great rewards so make sure you do the battles when it’s on. You can get a free Sigil 7 if you win/save up enough.

CRESCENT TOWER: Free tries daily (not like you’ll use them all eventually as you’ll get hardcapped at a certain stage), so just clear whatever you can to get free tactics!

On how to spend your gems efficiently, check out the Diamonds Guide here.