ZOMBIEMAN: SHOULD YOU PULL? 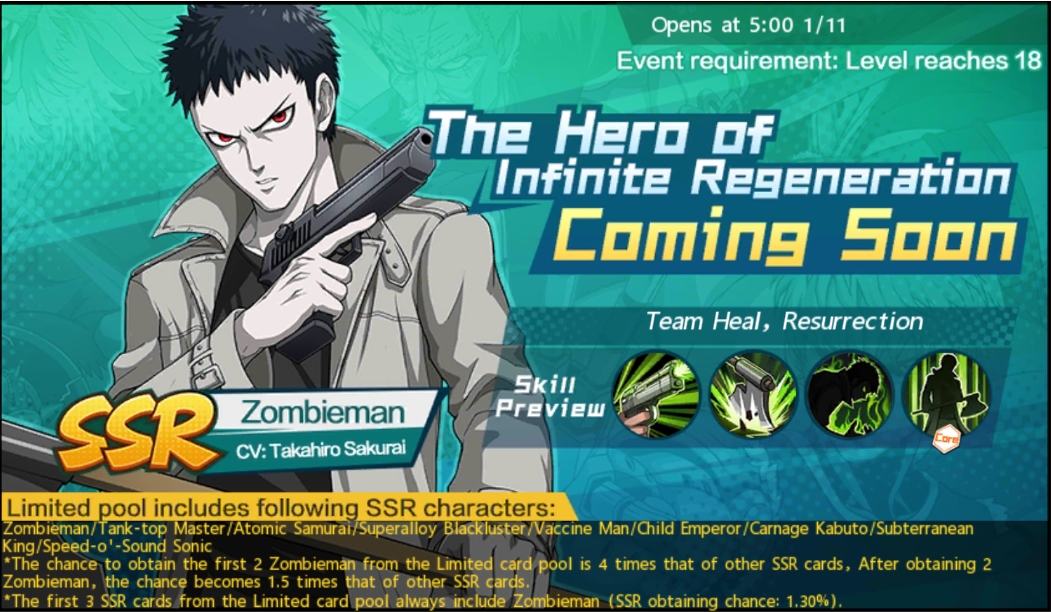 Hey guys. What better post to start off this website with a Zombieman guide! As of writing, we are only 2 days away from the Zombieman banner (SEA), so I thought I’d do up a post on him first before I start to write all the other basic game guides.

Zombieman is THE LSSR to have, and I hope you have been saving up your black tickets for him. He is the meta-changer when he comes, putting an end to OTK (one-turn kill) builds, like the Shatter AS/GB combo that has been dominating since launch.

With his revives, an ult that heals his whole team, and an AoE heal every round (for 2 rounds), his core will simply be the most powerful until the rest of the LSSR comes out.

And not only useful for PVP like arena/tournament, but also in PVE. He is a core essential to get to Turn 10 for club bosses like Geryu, and a must for club boss Boros. And he’s also useful for Institute as a front wall, as well as HxM.

Basically, you can’t go wrong with him, and you’ll use him almost everywhere possible. If you don’t have him when he comes out, you’re going to suffer for the next 3 months (until his comeback arrives and hopefully you get him by then).

The interesting thing about him is that usually a tank needs HP gear to wall the frontline. However with his constant heals (ult based on his ATK) and his core revive, you can gear him up with ATK gear to get the most heals, and yet still hold the frontline with his revive, AND still deal high single target DPS (even more with Primal set).

His revive is also unique that it activates on his turn. Unlike the Genus clones that spawn at the start of a turn and then they can be killed off immediately, ZBM only revives when his turn comes, MEANING he is GUARANTEED to pull off a basic or ult. This means he is GUARANTEED to pull off at least 4 actions in every battle (assuming your backline doesn’t die so he can be revived).

If all that’s not enough to convince you, he is also the first core that doesn’t need at least 1 of each character type. His core only requires 3 grapplers and 1 duelist (himself), that leaves 2 slots for almost anything you want, so it’s very flexible.

Passive: When Zombieman dies, he deals 60% of his ATK as damage to all enemies. On the next turn, he will revive with 15% of his max hp. This skill can activate up to 4 times per battle.

Advanced Core (3 Grapplers):
Level 1: Restore 4% of Max HP to all allies after any unit takes its turn (including opponent), lasting for 2 rounds. After applying Internal Injury, ult dmg +20% permanently

Level 4: Gain 1 energy when inflicting Internal Injury. Can activate maximum once per round.

Level 10: Inflict 2 energy seal on enemies at the beginning of each round (only the highest seal will take effect).

Because his core revolves around tenacity and injury, you definitely want to apply those in order to get the max 4 energy every round.

This is a rough guideline to an ideal lineup. These are not “You must do this”, but more of a reference. If you’re F2P you might not have certain units like TT, then just put in the next best unit. If you’re P2W, you might have Silverfang, or King which is still useful to energy seal the opponents ZBM.

Dr. Genus: He is strong here for his passive mostly – He increase ATK of allies who heal HP by 20% (30% if you have him 5*), which is basically after every action due to ZBM’s core. So your whole team will be dealing 20/30% increased damage (for 2 rounds).

Carnage Kabuto: Why CK? He’s just damn good because of his damage reflect and self ult heal. He will be in your lineup forever almost.

TTM/DS: You can choose to put TTM and DS at the backline to protect them, since tenacity on CK will reduce his damage reflect as well.

Zombieman core will be

Strong Against: Basically everything that is not ZBM core, assuming fairly similar BP and gears. CE core cannot burst down fast enough due to the heals and revive. DSK core cannot reflect enough damage to kill. DoT builds cannot kill fast enough as the heals offset the DoT damage. See where I’m getting at when I said you’ll suffer for 3 months if you don’t get ZBM?

Average Against: Himself. The only thing that can compete against ZBM core is a ZBM core at this point of time. Sure, an energy seal from King might slow the enemy down, but I personally think that in a ZBM mirror matchup, it all boils down to who has the stronger CK. Stronger CK = more self-sustain (with KS), and will eventually outlast the enemy.

Disclaimer: The above are my own opinions and theorycrafting, we’ll have to test and see when he comes out!

WHAT IF I DON’T HAVE ENOUGH BLACK TICKETS?

You should know by now that only draw if you can guarantee the unit, meaning you need 180 BTs. If you don’t have 180 or near it, all is not gone. I suggest you continue to save up and wait for the next ZBM comeback banner, most likely in 3 months if SEA devs don’t mess around with timelines again.

If you want to save for Garou or Gyoro-Gyoro, be my guest and go ahead, it’s your BTs, although I wouldn’t recommend it.

That’s all guys, I wish you all the best in drawing ZBM, good luck!