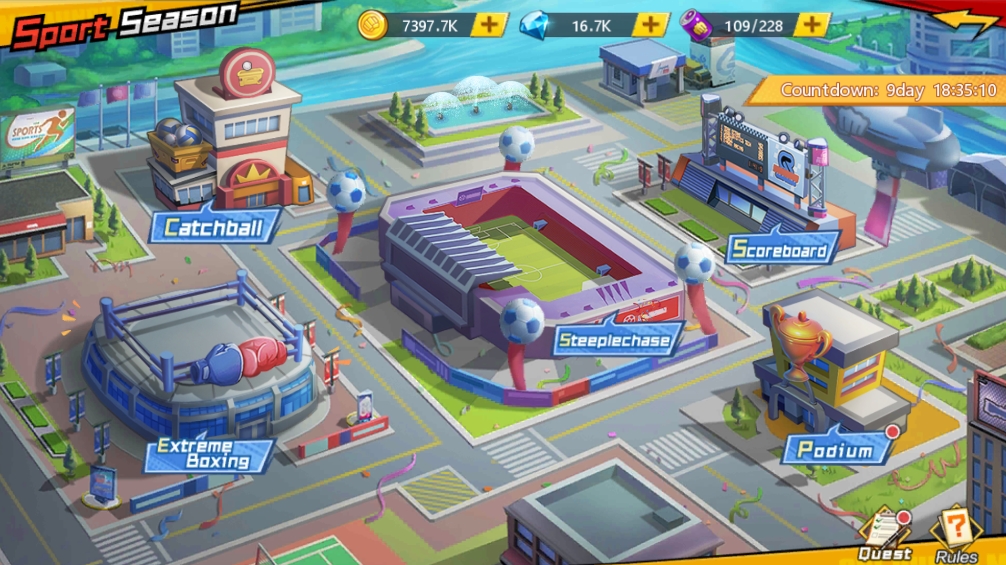 Time flies! This event is back again, if you’re a Day1 player. I remember it cos of catchball hehe.

If you are doing backup stick make sure you allocate some vit to complete those quests too. Use Saitama Intel if required for this event.

The usual spend vit to clear stages – main drops are Medals and Vouchers.

There’s only 1 chapter and 2 modes of difficulties for each – Normal and Hard. Do Hard last stage for the sweeps.

Use Whistles for bonus drops.

You can unlock sweep mode once you achieve perfect clearance (must clear on 100% auto and don’t touch the skills at all).

UPDATE: Last stage drops 16 extreme and 19 medals. It seems you CANNOT sweep hard stages (can do multiple), BUT there is a cap of 3x each. And there’s only 3 stages (Amai, Linlin and G4), so you can’t exactly farm them. So definitely clear all the hard first, then sweep the Normal Flashy if you want to grind.

Deploy 2 teams:
-First team to counter the boss’s weakness at the bottom left

GYORO:
Suggested line-up: CE (core), DSK, Sonic, Groribas, GB, MEM
Please adjust according to what you have, eg King/MotS/Konbu/AS, etc. Best if you can get corrode/shatter on basic

WDM:
Suggested line-up: Bakuzan (core), Fubuki, Linlin, Alloy, Fukegao, any duelist.
Of course if you have Gouketsu, Garou, etc then please use them.

ATT:
Suggested line-up: CE (core), ATT, Fubuki, Alloy/TTM, Groribas, any duelist
If you have SF that would be ideal

-Second team to kill boss
Use your usual club boss line-up should be fine!

Reward is 15 medals for all bosses so no diff.

This is actually a super fun mini game to play. Basically move left or right to catch the good stuff, and avoid the bad stuff.

If you feel like you had a bad streak, you can just force close the app, it won’t use up your chances and you can keep trying.

The highest score to hit is 901 to get the highest tier of rewards.

I personally find playing on Bluestacks is much easier, but you’ll need to add in some custom controls.

Go to Game Controls on your right sidebar > Open Advanced Editor > Drag “Tap Spot” to the left and right buttons in the game, and set them to your desired keys (for me it’s just left and right arrow key). Viola! You can do this in “Try out” mode in-game so you don’t waste chances.

So remember all the medals we won earlier?

This is where you exchange them for prizes tickets.

There are 2 reward tabs here – Score and Ranking

I’m just gonna type out the main prize here cos I don’t wanna screenshot so many times. And I’m ignoring the gold.

The must haves are in bold, so minimum you need to hit 7000 points. The rest are not too bad but up to you.

For Ranking rewards, they are doing the temporary avatar nonsense again. Multiple times I have voiced out (and even told them in their surveys) to remove the 7d and 14d avatars, it’s free and doesn’t help the player to win in any way, just give it to them permanently for free goddammit. Seems like they’re still not listening, hence the game is slowly dying.

If you are willing to spend vit on this event, the Sigil V box is very nice.

This is where you gacha your prize tickets from exchanging above.

No Tiers this time, so it should be easier to get them prizes. Basically all of them are great and usable.

Definitely aim for all 10 SACs, and the orange gears. Class S1 is great if you still need it for your Genos/WDM.

Nothing much to talk about here, definitely aim to finish them for extra goodies.