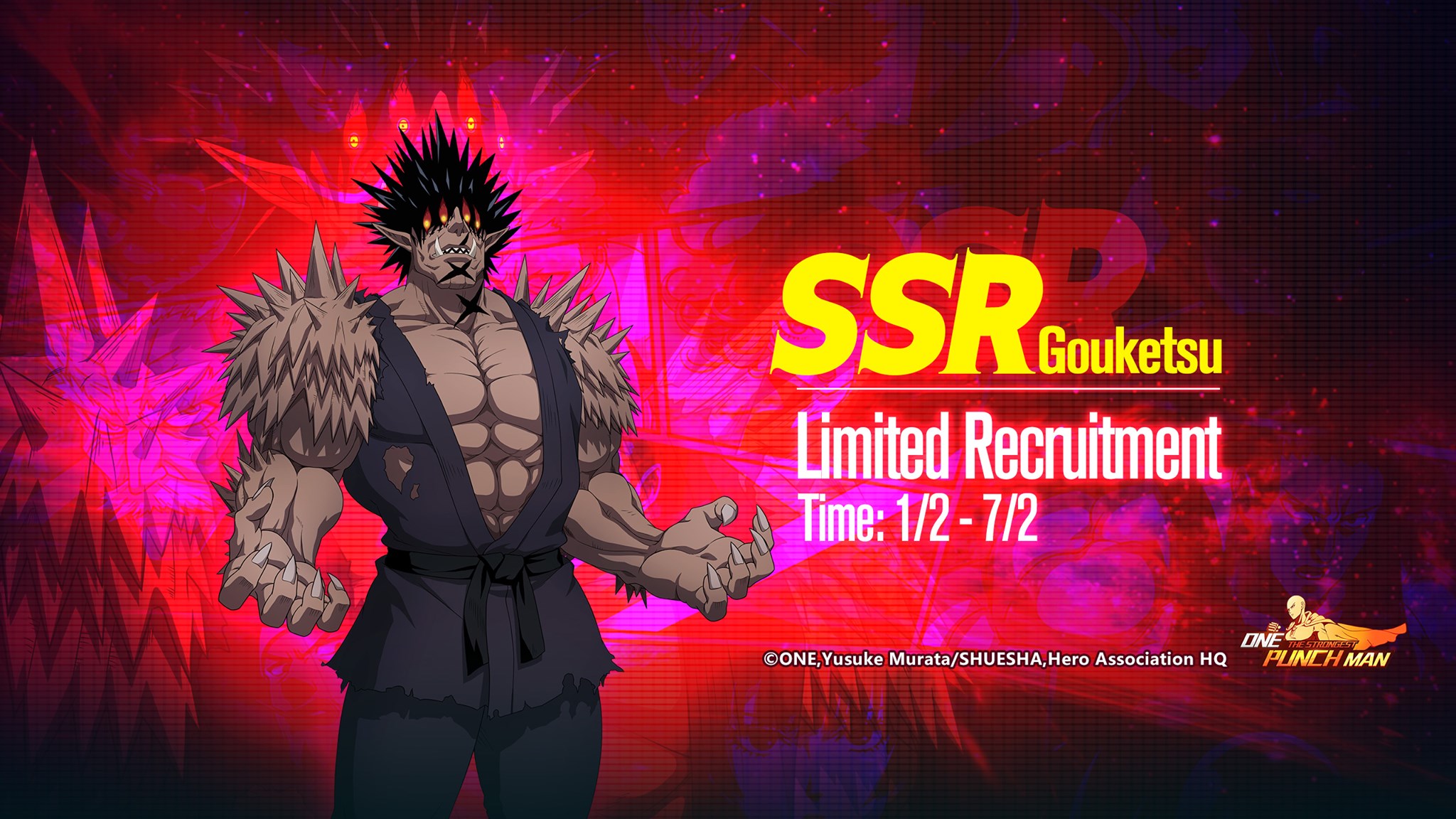 F2P: Pull if you focus on Monster, or you really like him. But make sure you have enough for Gyoro (tentative Apr) – core units are most important.
If you don’t have ZBM, skip Gouketsu and get ZBM during comeback.

Role: AoE DPS / Pseudo tank / Self-heal / Tenacity+Healing support Boost
Type: Grappler / Monster
Meta Duration: I would say his use is situational due to his passive, probably at least 6 months more? Might have synergy with SSR Amai, but will probably start to slowly fall off during ATT/Genos period.

Basic: 1-hit 120% damage to one foe, and 100% chance to inflict Internal Injury to that foe (deals 100% of Gouketsu’s ATK as damage when foe is attacked again – effect disappears after foe is hit)
Ultimate: Deal 180% AOE Damage to all enemy and heal himself by 20%.
Passive: Whenever received non-critical damage, it will reduce by 30%. First 2 round, Gouketsu and ally that surround him will gain 70% boost for in Tenacity and Healing Rate.
Ultra-Ultimate:
AoE ATK 180% > 210%
Extreme-Passive: TBC

He’s good, and some people like him from the anime. If you really like him and play the game for him, go ahead and pull! If not for the back-to-back upcoming strong LSSRs, I think he is a great pull for F2Ps.

Also do note that Feb is the comeback for ZBM as well. If you don’t have him yet, I 100% recommend pulling ZBM first, then save for Gyoro core. ZBM’s heal and revival (up to 6 times with 5stars) is always a core for PvE which you will find critical for Elder Centipede, Club boss Boros and more! Always prioritise PvE as you gain more rewards from it than PvP.

If you miss this ZBM comeback, no one knows when he will be back, so you might not see him in a long while. Even if you miss Gyoro/RMG or even Gouketsu, you can always pull them in their future comeback.

Personally, I am skipping Gouketsu as I am saving for Gyoro/RMG for now!

Gouketsu could very well be a homage to Street Fighter. He seems to have a combination of the names Gouken and Goutetsu of the Street Fighter series, and holds a physical resemblance to many of the characters, wearing a Gi outfit with torn sleeves.