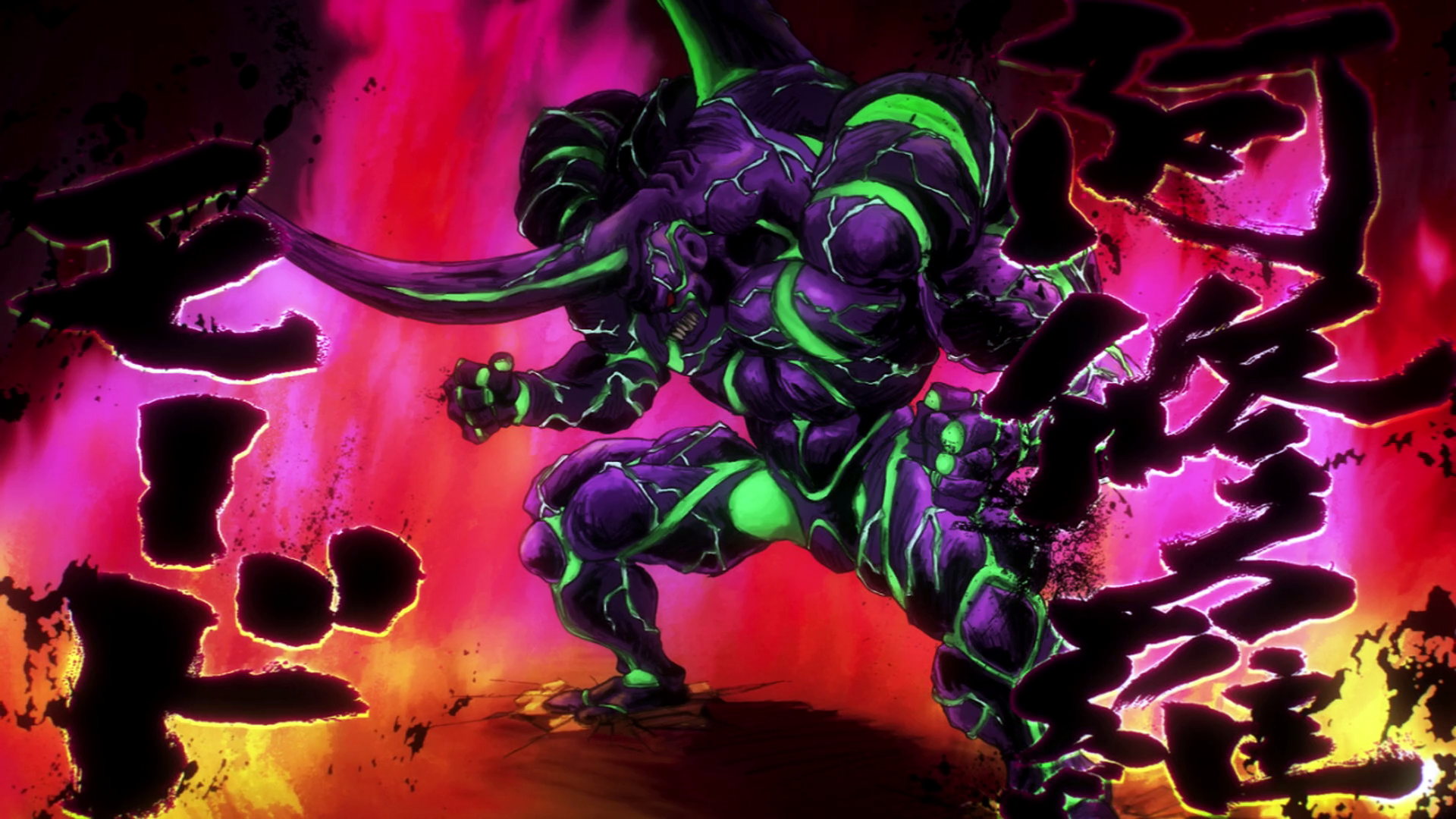 Basic: 5 hits 35% of Max HP as [Charge-Up] damage.
Ultimate: 3 hits Single target attack dealing 35% of Max HP as [Charge-Up] damage, giving himself [Uncontrollable] (lasts 1 turn) – He will Chase with [Ultimate] when enemy makes a move. Chasing up to 2 times per turn.
Passive: After taking damage or being defeated, reflects 50% incoming damage (as EXTRA dmg) to 4 random enemies (Tenacity/Resilience +lost HP).
Awaken Passive: At start of battle, will increase self Max HP by 25%, and HP boost effect will boost 4 times (Exactly same with Gyoro core) and will regain 50% of his Max HP (basically is fill up his missing HP at beginning).

Ultra-Ultimate:
After Ult, gives himself continuous Heal for 1 turn (35% Max HP)
Extreme-Passive:
Reflect 4 random units > ALL enemies
5P Passive:
Reflect 60% to all enemies
Awaken 2:
Self heal 25% Max HP > 30%
After defeated, rez with 70% HP in the next round once per battle
Awaken 3:
Increases 150 energy gauge after action

Pure HP%. SPD is not so necessary, but if CK goes last after all the enemies then the won’t be chasing enemies, so just take note. If you want him to chase, then you can put some SPD gear, or put him in same row as Sonic.

Recommended set is Primal (for offensive) and Magic/Suit (for defensive)

If you are aiming for a more offensive pure dmg reflect build, you can also consider using Bonus Extra dmg.

FINALLY THE BIG BOY CK IS HERE! For those of you Day 1 players, you know how strong CK can be. I remember him being the one to carry me through both PVP and PVE as an F2P.

I was the server’s strongest CK for awhile (when everyone else was building AS and TT), and all the whale’s burst shatter line (remember AS/CE/GB/TT combo?) basically killed themselves, and then suddenly everyone wanted CK’s KS (which I got in the very first Claw Machine).

For PVE, it carried me through one of the hardest content at that time, which was the Awakening Trial, till lv7.

Now, not only is CK back, but he is way improved. On the old CK v1, he only reflects IF he doesn’t die, or if he takes real damage (so damage blocked by Tenacity does not reflect). However for SSR+ CK, the DMG reflect activates as long as he is hit. So even if he has shields, or even if he dies, he will still reflect a heck ton of damage right back at the enemy.

Secondly, CK is so good because his damage reflect is passive and multiplicative. What do I mean? Basically he does not need to waste an action to deal his damage reflect, it activates during an enemy’s turn – this is always good. Next, the damage is multiplicative because CK takes X amount of damage, and dishes it back many times!

And the above is just a simple calculation without shields. For SSR+CK, the dmg reflect is based on Shields as well as HP lost, so if your CK takes a huge hit which wipes the shields AND kill CK, then that’s a lot of dmg to be reflected.

Lisara (taken from Lance discord) made a nice example which I’ll just post below. It’s comparing between HP and Bonus DMG buff gears but you can also see the breakdown for how the reflect works here.

And since you know how hard PVE units hit at the higher levels, they basically will one-shot themselves, even if CK dies!

If you AWK2 him, he even gains more self-heals and a revive in the next round!

But wait, that’s not all! Special PSA if you have WDM! From the research done by the discord community, namely J. (The Pintu), the WDM HP buff stacks with SSR+CK in the same column.

*If any of the above info is wrong, please let me know and I will update 🙂

When we talk about KS for F2P, we need to consider 2 things – How much does it improve the Ultimate, and how critical is the P5.

For CK, he fulfils both criteria. With KS, his ult will now give him self-heal for 35% Max HP for 1 turn, which synergizes very well with his kit. More heals = stay alive longer = more dmg reflect done!

For his P5 passive, it gives CK a whopping 60% dmg reflect to ALL enemies. This also synergizes very well with his kit, and is useful in both PVE and PVP, so it’s a no-brainer.

I would say a very high recommendation to get his KS.

Carnage Mode (阿修羅モード, Ashura Mōdo): Carnage Kabuto transforms and greatly increases his strength. It causes his appearance to change; his teeth grow sharp and his eyes turn red; his body bulks up and the horn on his head sharpens to a point. This mode caused him to go into an uncontrollable berserk rage that lasted for a whole week, during which he claimed to be unstoppable.